‘Gael’s Vision 40th Anniversary Edition’ is the remixed and enhanced version of Joe O’Donnell’s 1977 album ‘Gaodhals’ Vision’.  It has four additional tracks and some fine previously unheard contributions from Rory Gallagher.  There is also the live DVD of the complete album performed at Coventry Belgrade Theatre by Joe O’Donnell’s Shkayla, guest musicians, Irish and Indian dancers and more, plus 16 page full colour booklet too – all for £14.95.

Why the 40th Anniversary Edition?

Delving into the master tapes Joe has added 18 minutes of material, all remixed, re-mastered, and some arrangements enhanced. There are four tracks which were not included on the original vinyl for space reasons.  One of these Joe has completed now for the first time.  He has also brought to light some previously unheard contributions by Rory Gallagher. Rory plays both his much loved Strat and his rarely heard Martin acoustic guitar.  His presence is as vibrant as ever, perhaps even more so with the help of today’s technology!

05. The Battle an Retreat Underground

09. The House of Hostages

10. For trades and Hospitality

13. Poets and Storytellers – with Rory Gallagher

Included in the package is the full-length live DVD of ‘Gael’s Vision’ performed by Joe O’Donnell’s Shkayla with guest musicians, Irish and Indian dancers, narration and dramatic images, filmed at the Coventry Belgrade Theatre.

Features to look out for:

There is also a fine 16pp illustrated souvenir booklet with insights into the original album and the 40th Anniversary Edition by John O’Regan and Pete Clemons. 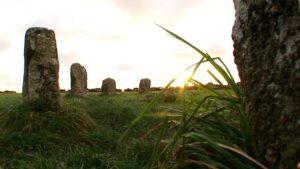 From ‘Standing With Stones’ by Michael Bott. Used with permission