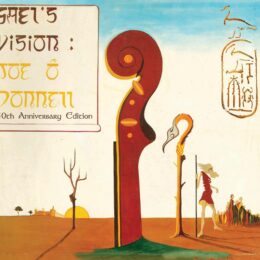 We are really excited to announce the UK launch of ‘Gael’s Vision 40th Anniversary Edition’ on Monday October 26th.

This is Joe’s highly original concept album about the mythical migration of the Milesian people from Egypt to Ireland.  We say ‘Finally!’ because it marks the culmination of years of work.

Joe has painstakingly trawled through all the original analogue tapes, remixing, re-mastering, and in some cases adding instruments; some of these feature members of Shkayla.  He has been able to add a lot of material too, because of the limitations of the previous recording medium.  In the process he has brought out some beautiful guitar passages by Rory Gallagher that were not heard on the 1977 LP.

Just to get a flavour, listen to ‘Caravan’.

Joe has always seen ‘Gael’s Vision’ as more than a recording project, because of its historical and cross-cultural aspects.  As Pete Clemons put it, ‘Ideas that had formed in Joe’s mind 40 years ago became real’ with the staging of Gael’s Vision by Shkayla and friends at the Coventry Belgrade Theatre in 2017, and he was able to include atmospheric visuals, Indian and Irish dancers.

The CD and DVD will also be available for download and streaming.

Watch this space for more tasters and info about ‘Gael’s Vision 40th Anniversary Edition’ and the launch on October 26th.