home » About the band » More about Joe O’Donnell 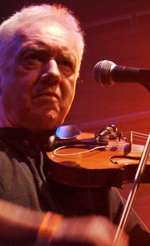 Joe O’Donnell is one of the finest electric violin players performing in the Celtic tradition. He is also widely acclaimed as a mandolin-player, singer and composer. Over his musical lifetime Joe has associated with leading names in rock music and Celtic folk such as Rory Gallagher, Steve Bolton, James Litherland, Dave Lennox, and Gay and Terry Woods, and toured widely in the UK, Europe and the USA.

Born in Limerick, Ireland, Joe began taking classical violin lessons at the age of twelve. After seven years of study he won two scholarships for the Royal Irish Academy of Music, Dublin, to study orchestral work.

After leaving the Academy Joe took up lead guitar but returned to the violin two years later, the first electric violinist on the Irish scene. He  played in leading Irish groups including Granny’s Intentions (Decca) who had also featured Gary Moore on guitar, Sweet Street, Orange Machine and the Uptown Band.

In 1971, Joe moved to London and for nine months joined The Woods Band, featuring Terry and Gay Woods, who went on to form Steeleye Span. It was at this time that he started making electric violins for his own use, including violectra and 8-string violins.

In 1973, Joe joined East of Eden stepping into the shoes of their celebrated fiddle-player Dave Arbus. He played on their hit album ‘Another Eden’ and toured Europe with the band until they split in 1978.

At other times Joe had the pleasure of working with producer and sound engineer Elliot Mazer (Dylan, The Band, Neil Young) and writer-producer Larry Latham (Eurythmics).

In 1977, Decca released ‘Gaodhal’s Vision’, a concept album of Joe’ own compositions, heralded as a fusion of Celtic music with jazz and rock. Tubular Bells producer Tom Newman and Jon Field (Jade Warrior) were influential in getting the album released.

In the next few years Joe gigged up and down England with his bands Call a Doctor and Yan Tan Tether, appearing at all the prestigious London venues such as the Mean Fiddler in Harlesden, George Robey and Half Moon, Putney.

In the 1980s problems with management prompted Joe and Merlin (his then wife) to do a lot of soul searching. As a result they sold up and moved to Guernsey, effectively into semi-retirement. Their daughter Eleanor was born there.

Nonetheless Joe continued to appear with various line-ups at festivals in Brittany and the Channel Islands. This led among other things to him meeting and playing with the great Breton singer and harpist Alan Stivell.

In 1998 with support from Nina Szifris and Mike Scott, Joe began work on the first Shkayla album, in Oxford. He then moved to Coventry, to work with producer and musician Martin Jenkins, previously of acclaimed folk bands Dando Shaft, Hedgehog Pie and Whippersnapper. Joe released his next album ‘Shkayla’ and around this time formed the first line-up of the band Shkayla with Martin Jenkins and his guitarist son Ray.

In 2004, Martin and Ray Jenkins took up other projects. A new line-up of Shkayla was established when Joe recruited guitarist Dave Perry of In Athens (USA) and The Truth Monkeys (Norway), and keyboards-player / singer Martin Barter (The Alliance, Birmingham).

In 2008, Shkayla completed the long-awaited Shkayla album ‘Celtic Cargo’, described by fRoots as ‘folk rock of the highest calibre’. The band continued to appear at folk festivals across the country including Warwick, National Forest, Bunkfest, Great British Folk Festival etc.

‘Into The Becoming’ followed in 2013, (‘An alchemical marriage of rock and folk’ – Let It Rock), featuring Martin Barter, Si Hayden on guitar, Adrian Litvinoff on bass and Brendan J. Rayner on drums. With Karen Milne on drums the band took Warwick Arts Centre by storm in 2014 (‘the one gig of 2014 that really stuck in my mind’, Pete Clemons, Coventry Telegraph). The band is active in and around Coventry, and at festivals and folk venues further afield.

Joe continues to record and develop new projects, including a musical response to the WWII devastation of Coventry, to be released in 2015.

Joe uses Sonic Violins and a unique ceramic violin made by John Stevens.

Joe’s career especially the early years is documented in more detail on the site Irish Rock at www.irishrock.org