Posted by joeodonnell on Oct 18, 2020 in news, recordings 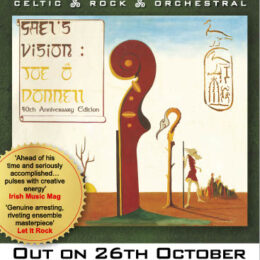 The UK Album Launch of ‘Gael’s Vision’ is making waves!

With the date still over a week away here are some things that have been going on so far ….

We are a feature in ‘Focus’, the lifestyle magazine for Stratford-upon-Avon, October edition.

Joe’s interview with Chris Egan for the Irish Post should be out this week.

Reviews are due to appear in Songlines Magazine and Rock ‘N’ Reel, both hitting the news stands in mid November.

We have been promised a mention in Living Tradition Magazine in December.

We have already had airplay on BBC Introducing, on ‘Groovers Corner’ on RTE (Rep. of Ireland) and the ‘Eclectic Celt’ on Limerick Community Radio with Joe in an excellent interview by John O’Regan.

More is coming up too, with interviews confirmed for ‘Stratford Calling’ podcast on 26th October and Welcombe Radio on 31st October.

The Official Rory Gallagher Facebook page has just posted our DVD track ‘Coire Sainnte’ (‘The Pot of Avarice’) featuring Rory Gallagher.  There are 370,000 members on that page – some potential audience!

We have coverage in ‘Omnibus’, the staff magazine of the Royal Shakespeare Company.  It goes to over 1000 people, some of whom might be really famous!

And please join us free for the on-line Premiere of our DVD on 26th October at 7.45 pm!  Help us to make the UK Album Launch of ‘Gael’s Vision’ a resounding success!More information here or register here for the countdown.

Thanks to all the pundits, presenters and journalists for taking an interest, and to Jazzfuel‘s Matt Fripp for some really helpful advice and guidance, and to Adrian’s mentor David Stevens.