Posted by joeodonnell on May 23, 2015 in Celtic music, news, recordings 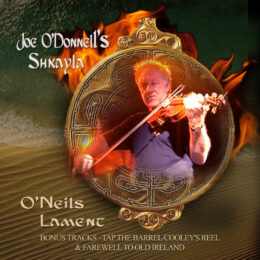 ‘O’Neil’s Lament’, the new single by Joe O’Donnell’s Shkayla, is out now! Available for download via iTunes or as a CD with bonus tracks, this is one of Shkayla’s most requested tunes at gigs, now in a new radio-friendly edit.

“I loved it as soon as I heard it” said well-known broadcaster and musician Bob Brolly. He has been giving the single and the band plenty of exposure recently, both on radio and television.

The tune is one Joe O’Donnell has had in his repertoire for many years, learning it from bassist Jerry Browning many years ago when they were on the road with Joe Giltrap’s band.

The release comes about through the band’s new partnership with Coventry Irish Society, the welfare and cultural organisation that supports people of Irish heritage in Coventry City and the surrounding area.  The Society is seeking wider recognition in the area and sees its collaboration with Shkayla as a means to expand its profile.