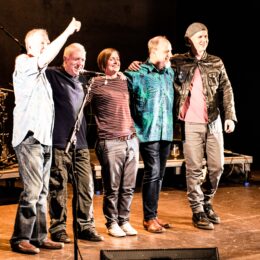 Joe O’Donnell says “After years of us knocking at the Council’s door, someone has finally opened it. I’m really pleased it’s this year, because in the same week we are releasing Gael’s Vision 40th Anniversary Edition. This is the re-mixed, reworked and enhanced version of my 1977 album Gaodhal’s Vision, which in some ways I think of as a high-water mark in my career.”

“That was my first album as leader. I had fantastic musicians with me, including the world-famous guitar superstar Rory Gallagher. But it wasn’t just Rory, there was Steve Bolton (guitar) and Dave Lennox (keys),  Bill Smith on bass and Theodore Thunder on drums, all really respected players. The band was ultra tight and played some pretty demanding music with great flare and energy, as anyone can hear who listens to the album.”